The butterfly effect is an idea that is more commonly used in chaos theory. A small change can make much bigger changes happen; one small incident can have a big impact on the future. The idea started from weather prediction. … This term can be used in areas other than weather.

This term was developed by Edward Norton Lorenz (May 23, 1917 – April 16, 2008) who was an American mathematician and meteorologist. He established the theoretical basis of weather and climate predictability, as well as the basis for computer-aided atmospheric physics and meteorology.

This Wallism is opposite from Green Beacon Brewing Co in Helen Street, Teneriffe, Brisbane. this area is full of wonderful, micro boutique breweries. Each have their own personalities and clientel.

Our smiles are our armour. April 2020

The image of the left hand page was found in a Tokyo subway station. It was an illuminated billboard for some advertising campaign and there were about 10 in the series. All the images were 19th century inspired Japanese based imagery but it really evoked a sense of contemporary Manga drawings for me. The image on the right hand page is a current ‘Wallism’ of the Lord Gladstone in Chippendale, inner Sydney.

Together at last. Feburary 2017

Beautiful homes and buildings crumbling due to neglect and hard times are being reinvented and turned into canvases upon which wonderful, playful imagery is placed. A statement of renaissance and deﬁance driven by the artists of Athens which ensures this eternal city maintains contemporary relevance. 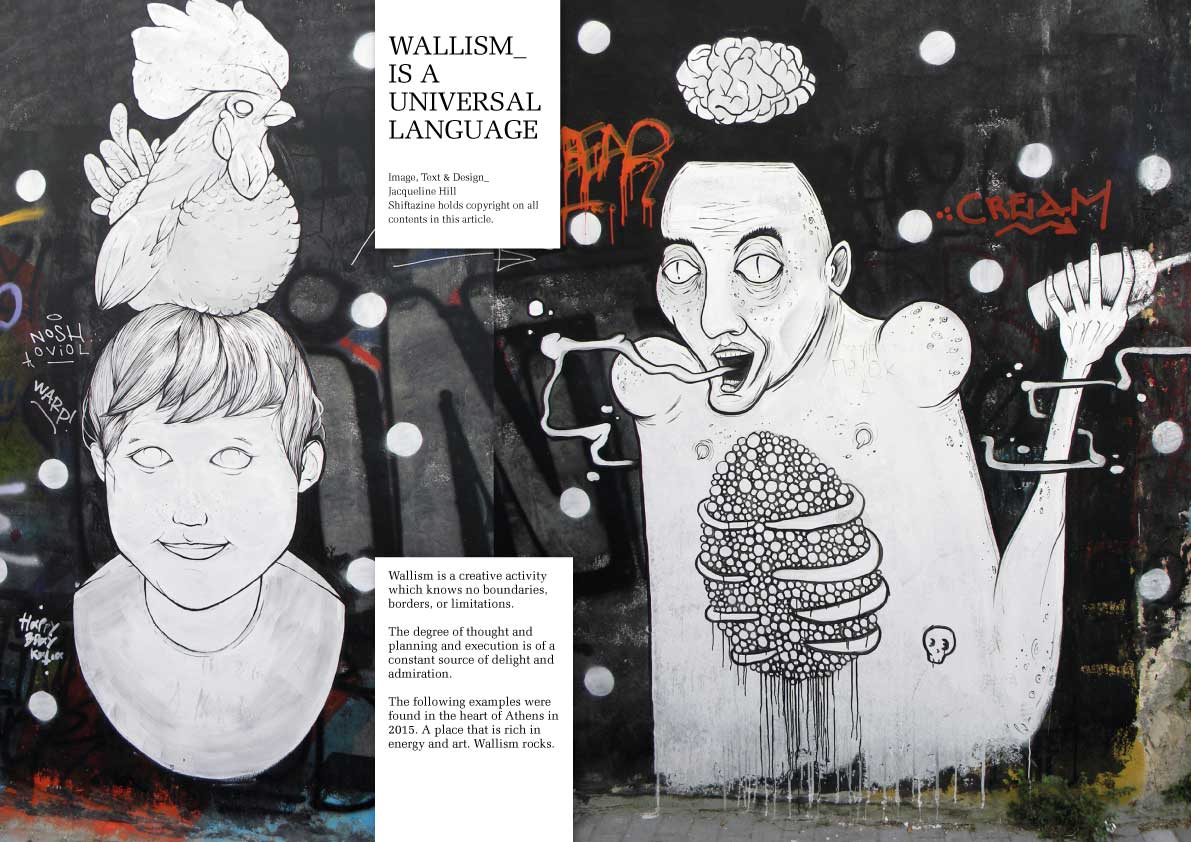 Walking home can sometimesbe a drag. Sometimes it throws wonderful things in front us. Pure ‘corner of the eye’ stuff. This example of Wallism was found at the intersection of Cleveland and Regent Streets, Redfern / Chippendale. It is a happy accident of actions and reactions. Just love finding something I was not looking for.

Delight, great pleasure, joyfulness, jubilation, triumph, exultation, rejoicing, happiness, gladness, glee, exhilaration, exuberance, elation, euphoria, bliss, ecstasy, rapture; enjoyment, felicity, joie de vivre, jouissance; literary jocundity. pleasure, source of pleasure, treat, thrill. And I bet you experience one of the above at least once a day. Be grateful for that and be in that moment. 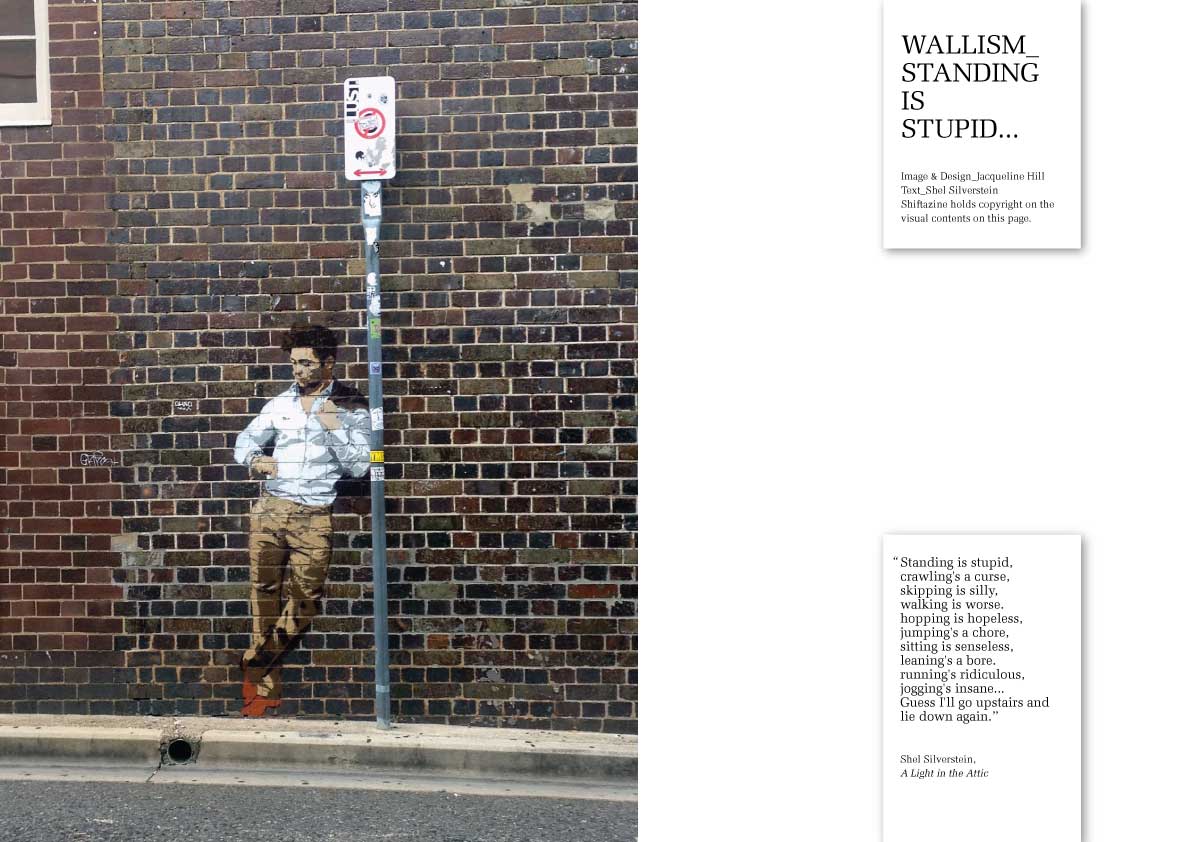 This two storey tall portrait of Australian journalist Peter Greste appeared on a wall in Redfern about mid December 2015, and served the purpose of reminding us of the plight of this unjustly imprisoned man and in it’s own small way was a part of Peter’s eventual release. The notion that we are helpless in adversity is not altogether correct. See the outcome, believe in the outcome, focus on the outcome. Live life as if the outcome is inevitable.

The word ‘Anthropomorphism’ is a noun. It means to attribute human characteristics or behavior to a god, an animal, or an object. We tend to give inanimate objects personalities. We project human qualities onto our animals. These are two really good examples of this. Just love what people do on walls. 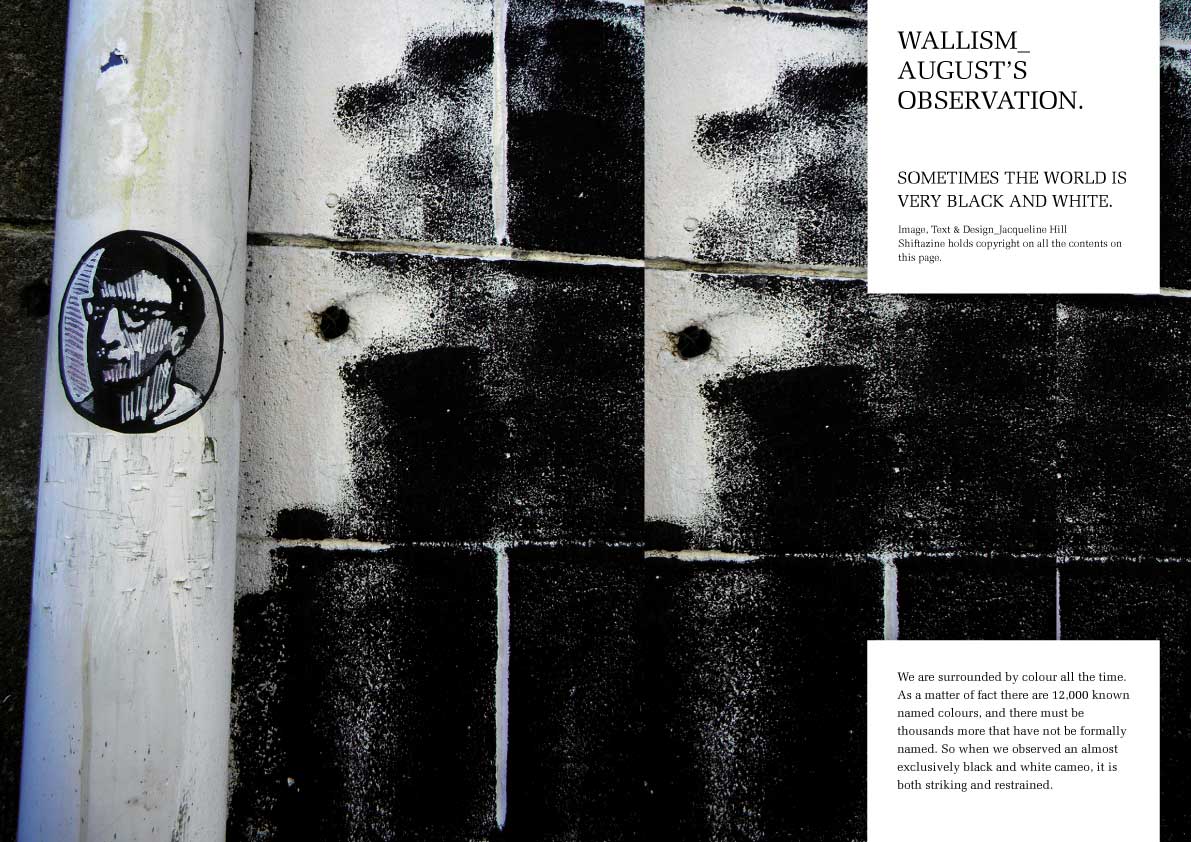 There is a lane way, well two lane ways, in the inner west area of Sydney called Mary Lane, and it is the venue for an art gallery that has gradually appeared and grown. This fantastic and organic art venue is full of the most beautiful and diverse contemporary street art. From street knitting to old school type based graffiti murals to beautiful paintings of herons (as this one). It is Wallism at its finest. 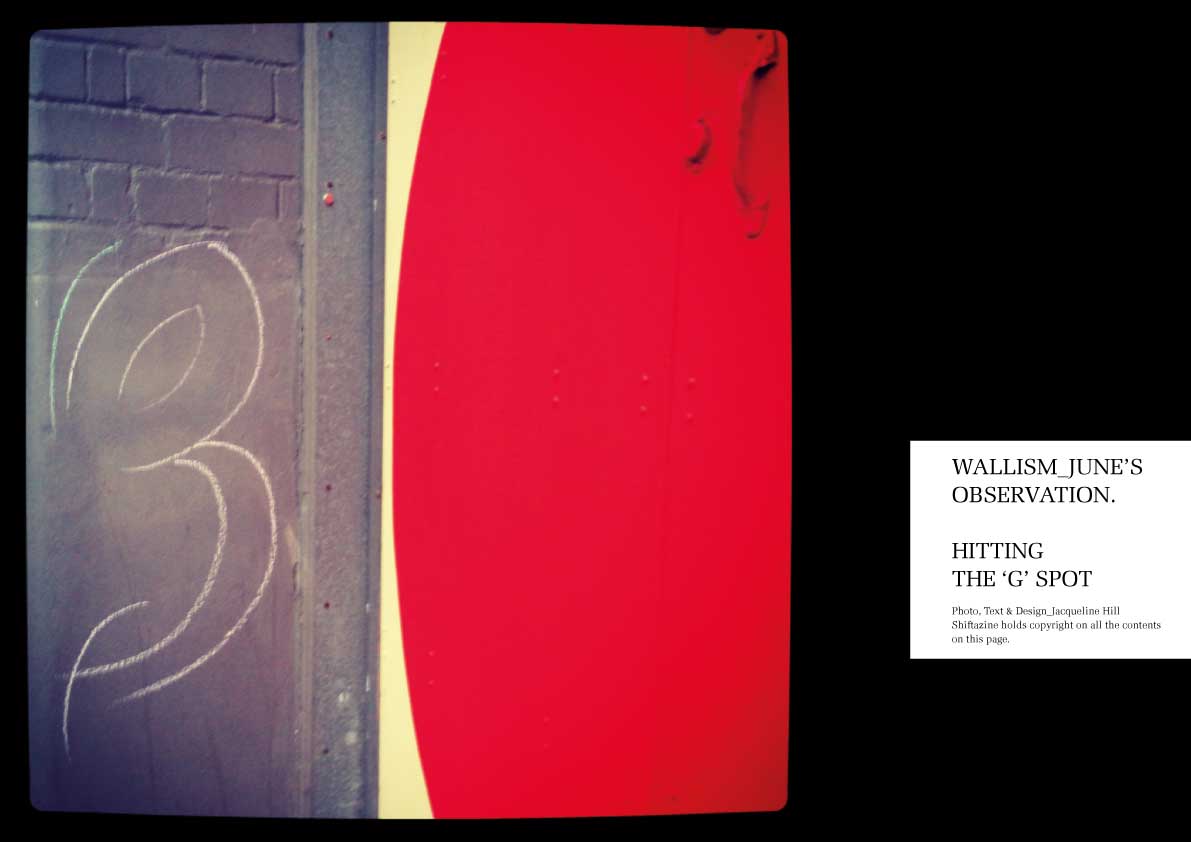 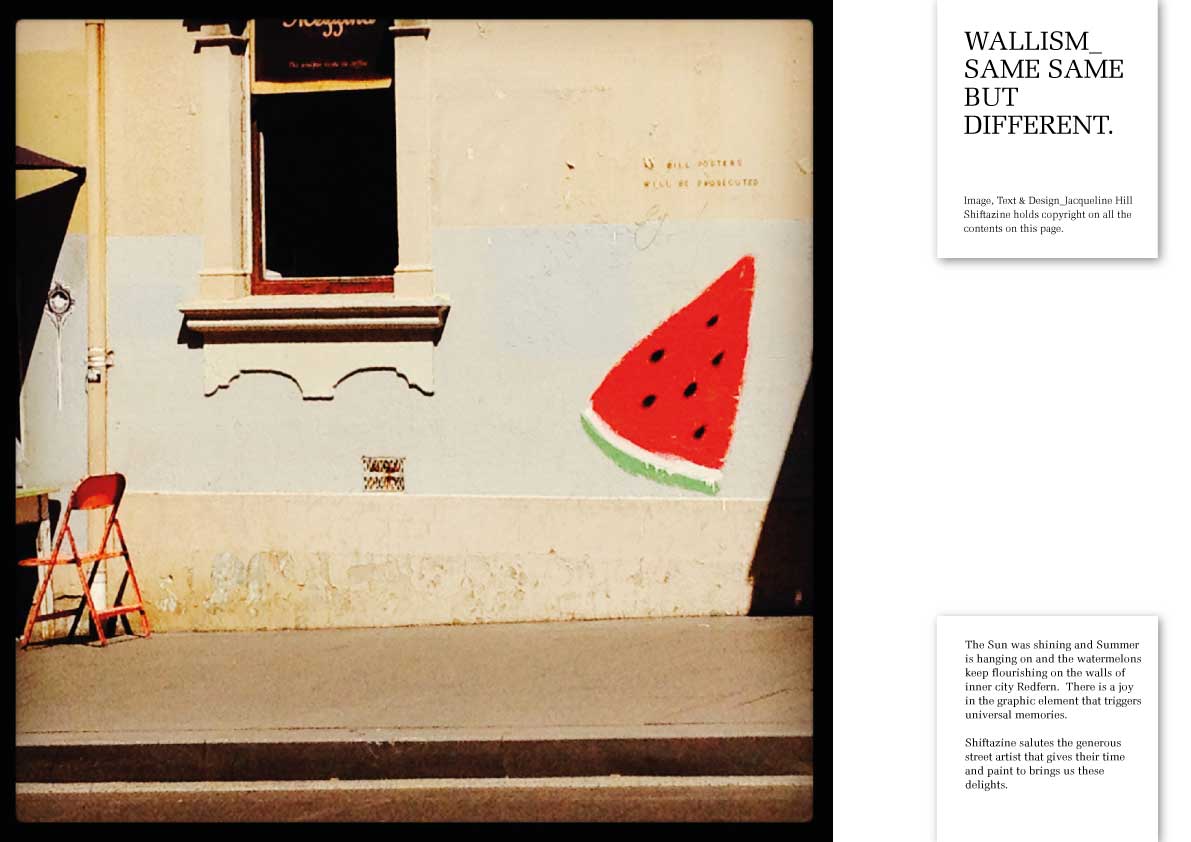 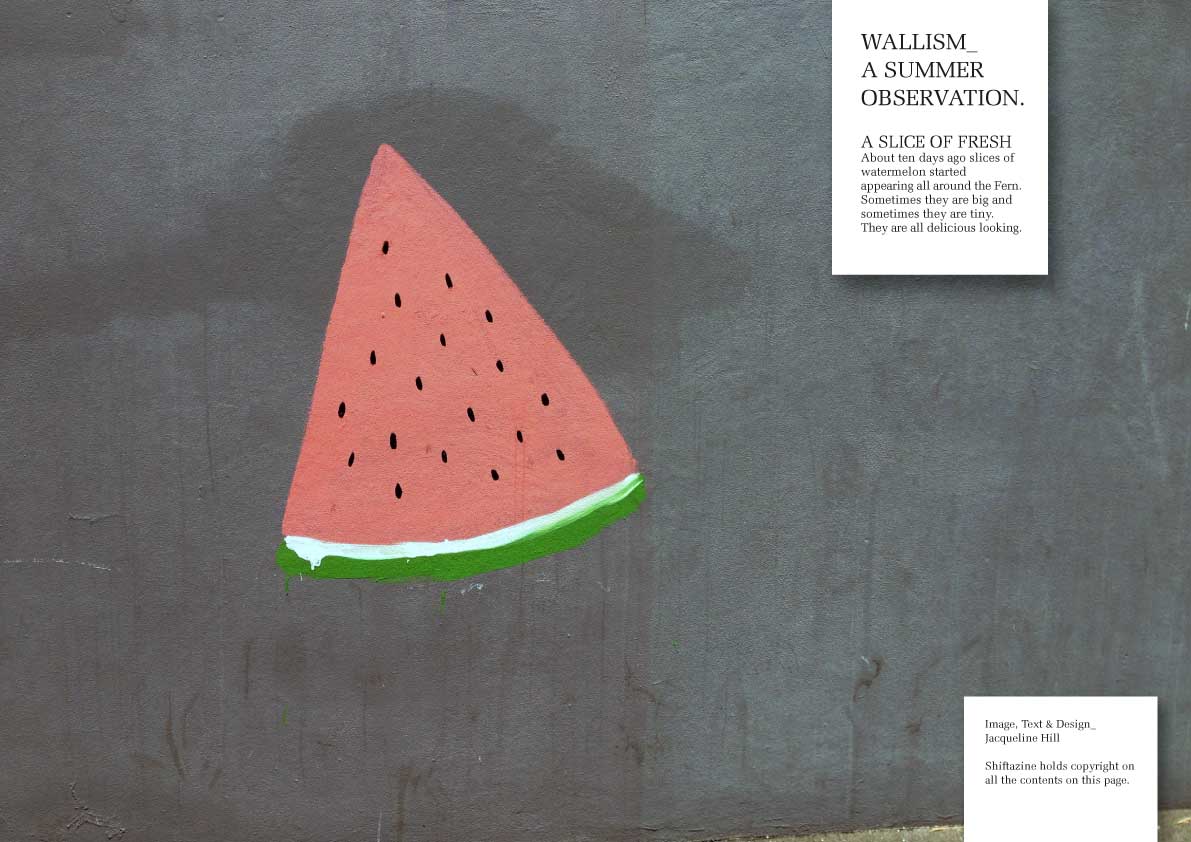 I remember when I shot these images I had a thought that this Wallism was doomed. This beautiful piece of visual communication, this wonderful, unique Wallism was torn down soon after, for no apparent reason. Then, eventually some god awful badly designed apartment block was put in its place. Old is not bad. New is not always good. 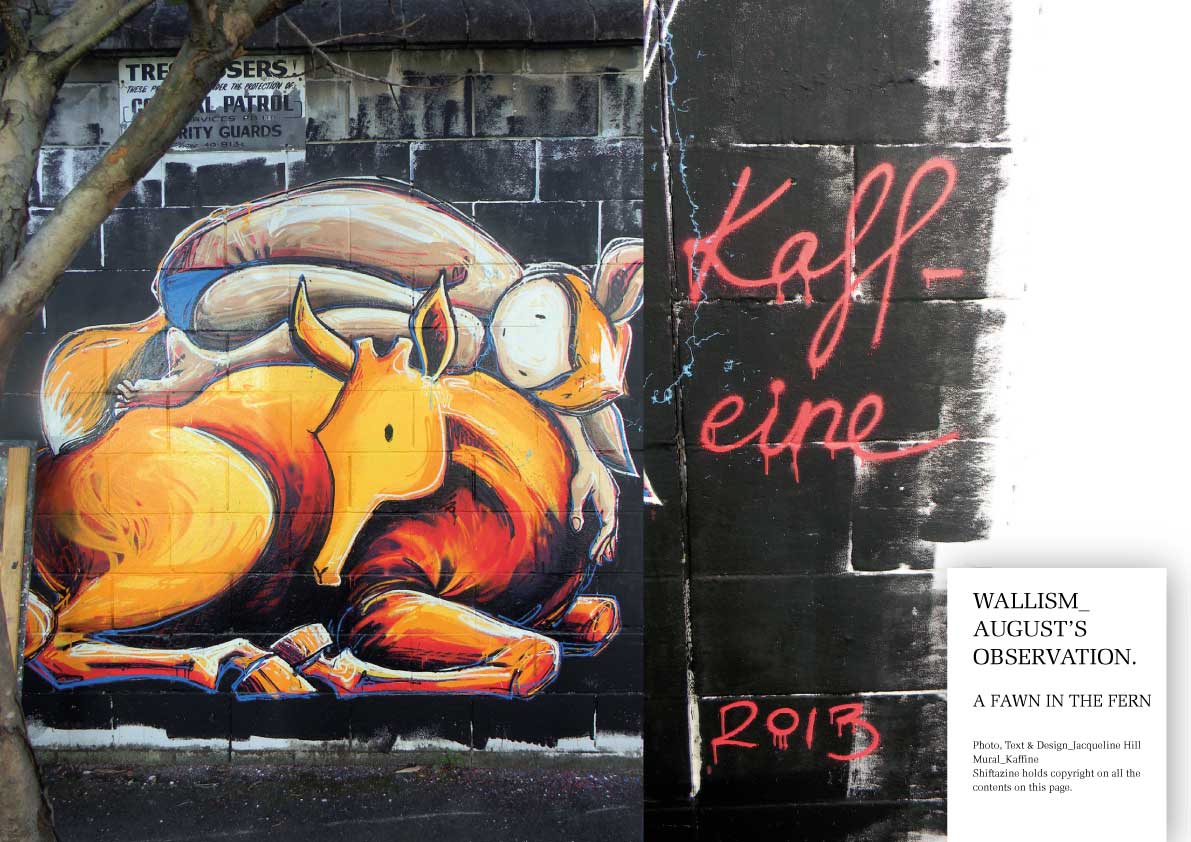 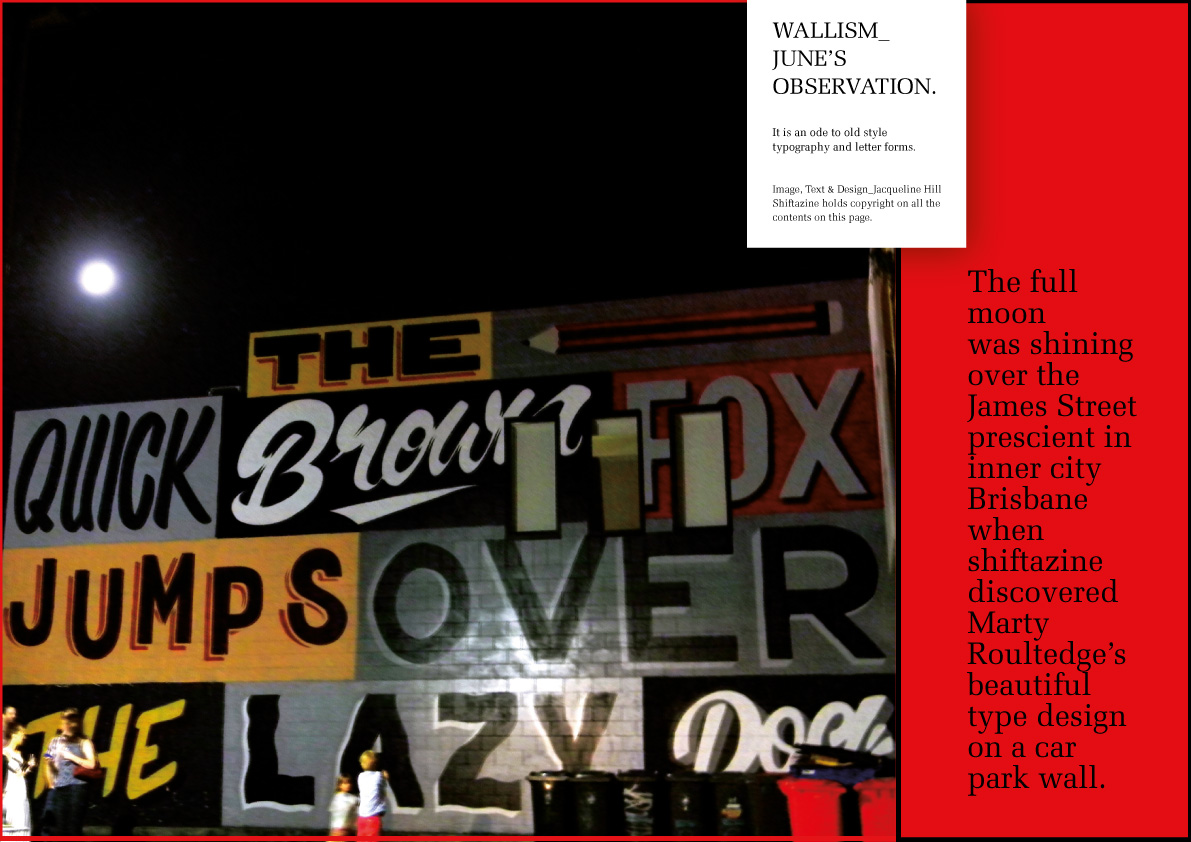 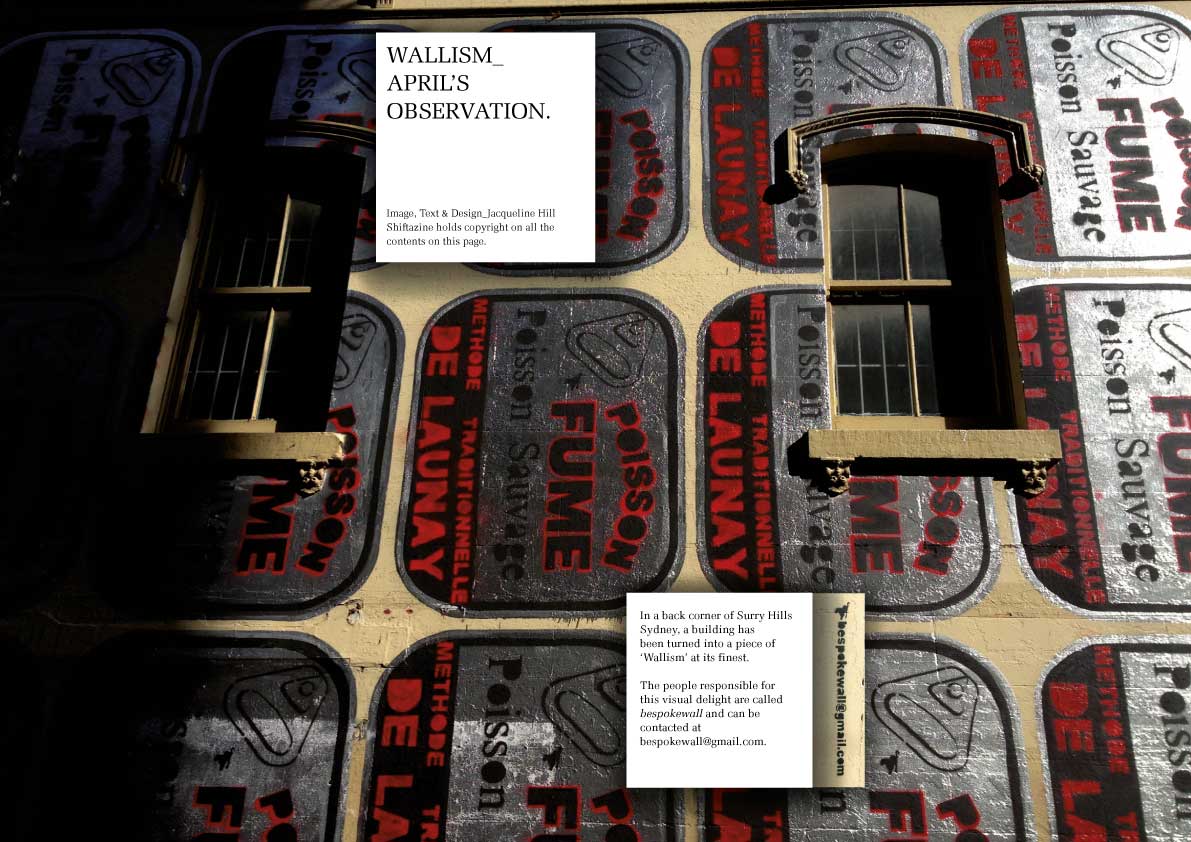 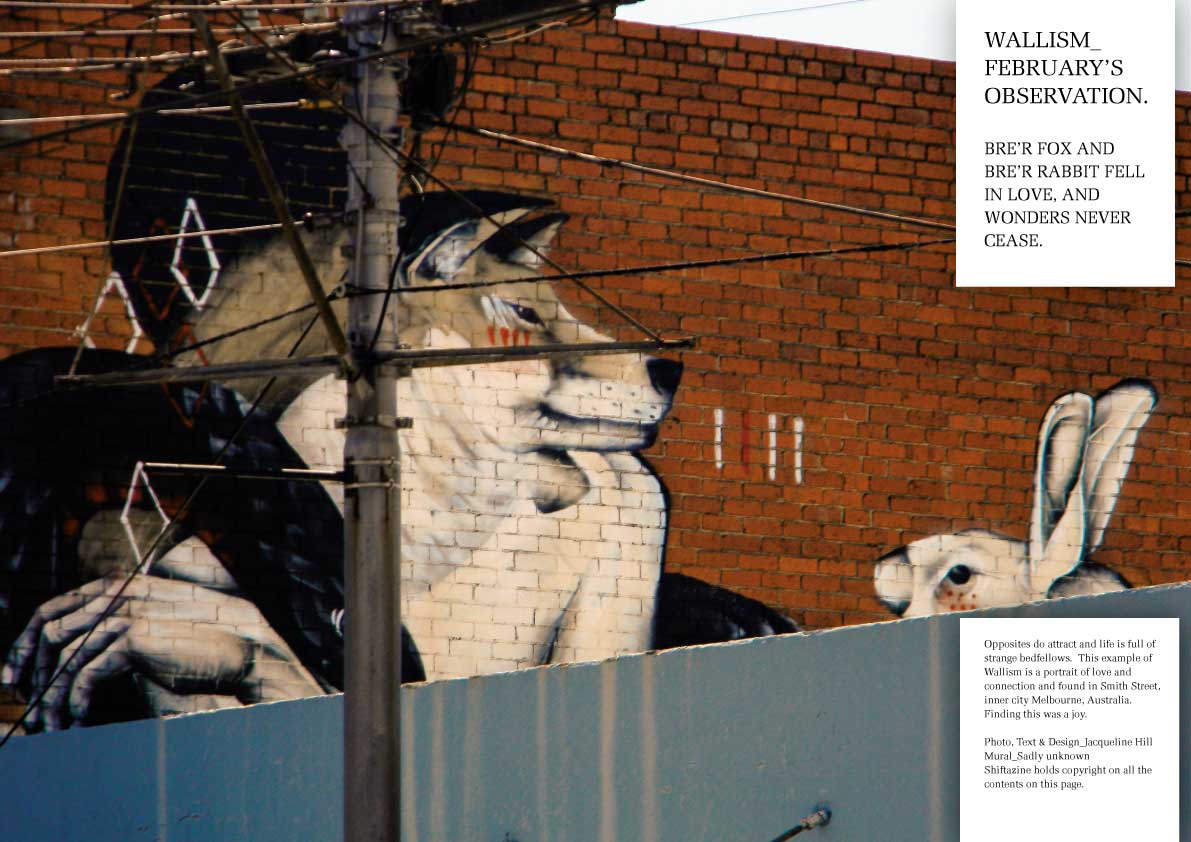 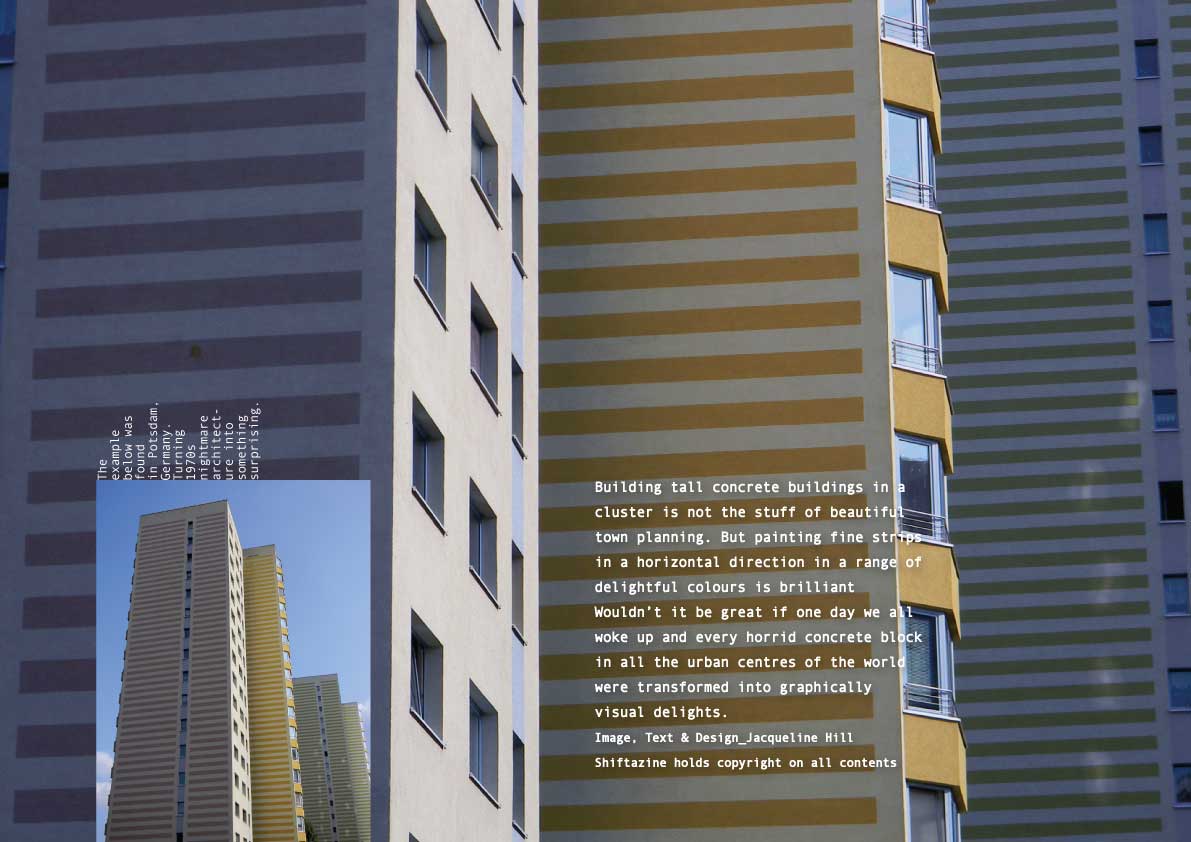 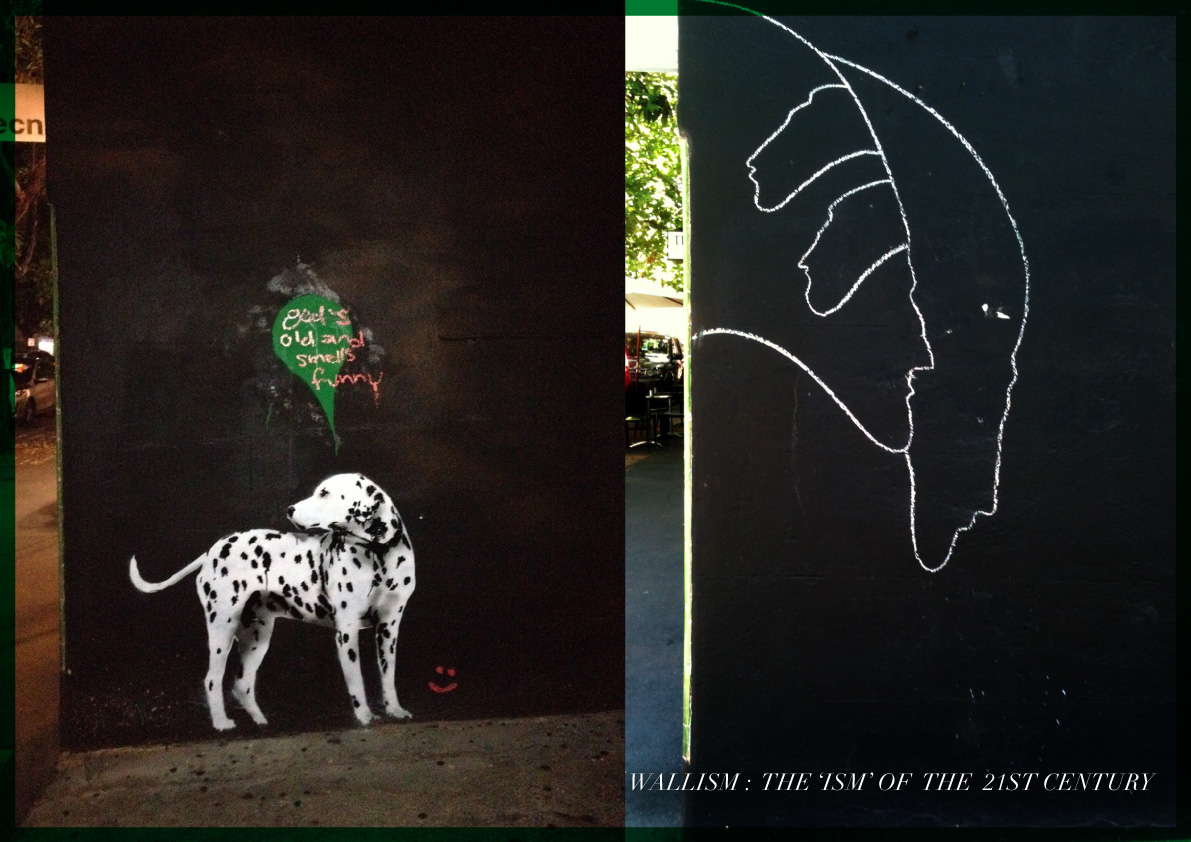 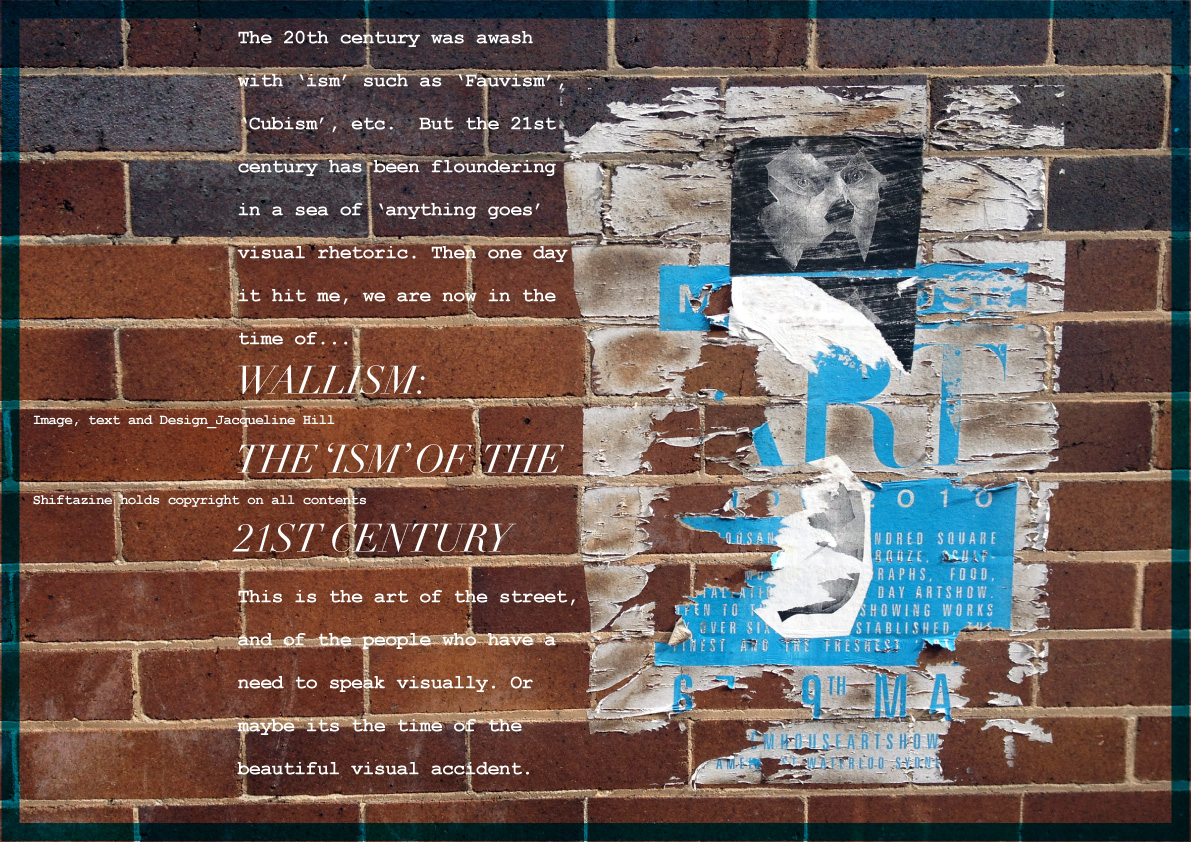 This was the first ‘Wallism’. It was just around the corner from my house and I walked past it everyday. Then suddenly, I got it. This was art.